How Authenticity Becomes Its Own Reward 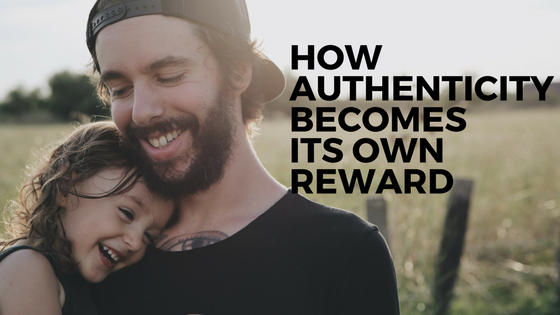 I’ve owned a janitorial company for 11 years. I was also in the process of writing a book about aligning my core values at home with my core values at work. The working title was Cleaning Up. Funny, huh? A janitor ‘cleaning up?’ The title was a double entendre. I know I should have bought a comedy club instead. The facts around cleaning up had to do with authenticity. When assessing who I was and where I was going in my life, I needed to look in the mirror. One thing that made that simple task hard was the fact that I had been lying. Lying to myself, lying to my company, and lying to anyone that would listen. I had to come clean.

When I saw that part of my problem was not being true or real, my steps toward happiness began. I started feeling better on the inside, which started showing up on the outside as well. By getting clean, I was clear to pursue my passions in life. Recognition was a win in itself. However, the reward of living and playing where I really wanted to be was equally important. It felt like this path had been there all along. I hadn’t realized that I had to drop all that other baggage to get here.

There was both fear and joy in letting go and finding out who I really was. At first, I was worried about others judging me. Ironically, I stopped worrying about others judging me when I stopped judging them. Funny how it happened that way. Today, I live a happier life because of it. It’s a lot less stressful worrying about my ego, or their ego–past or future. I am real, and I like it. My reward is that I get to live in the moment. I still fall down, but getting clean is awfully fun–like owning a comedy club.