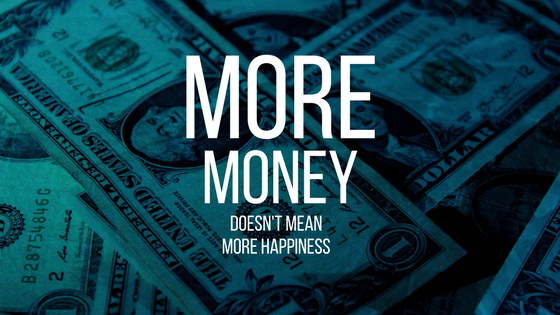 “You were broke when I paid you $5 per hour. You are broke now that I pay you $20 per hour. Even if I paid you $100 per hour, it reasons to stand that you would still be broke.”

That was a conversation that I had with one of my former employees about seven years ago. She didn’t seem happier now that she had more money. If I just get that other job and make more money, then I’ll will be happier. Sound familiar? It does to me. I always thought that if my bars and restaurants would make more money, then I would be happier. Again, I think I got some degrees of happiness when I made more money. However, it seemed like those happy feelings wore off quickly.

I have a great friend who says he and his wife were happier when they were in college—living in a one-room apartment and driving a beat-up car. He makes a lot of money today. He is on his own journey to happiness, and has realized that more money is a fool’s path. More money is not bad. It just doesn’t bring more happiness in the long run.

That’s what I’ve been trying to figure out with this happiness gig. If money doesn’t bring me more happiness–and I am saying that I want more happiness–then why am I always trying to get more? Should I be happy with what I have? Should I not try to make more? I don’t know. It seems that money is different to each individual I talk to. The documentary Happy on Netflix makes a great point. Five thousand dollars would probably bring more happiness to a homeless person’s life. They’d be able to obtain shelter and food with that much money. But beyond basic survival items, more money doesn’t necessarily bring more happiness.

This journey I have blogged about is about more happiness, not more money. Sometimes I wonder if I get that screwed up in my head. It seems logical that if I were really interested in more happiness, then I wouldn’t necessarily always be in pursuit of more money. What do you think?